Father Guglielmo Hentrich’s testimony, from the Society of Jesus,
member of Pius XII’s private secretary for sixteen years
and complete self-confidence man for the Pope. 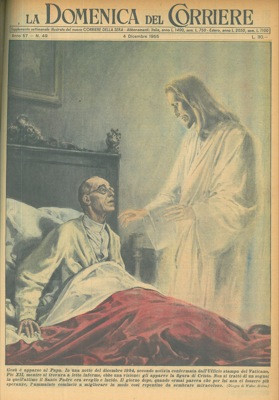 He said to me that the Lord had appeared to him, he had hoped, but…; I realized what he wanted to tell me and I hastened to say: “Your Holiness, we still need you”. After that he embraced me with great kindness and with tears in his eyes.

On November 24th, 1955, he called and told me the details of the appearance. On December 1st 1954, when he was alone in the room, he – as said to me – had heard a clear and distinct voice saying, “There will be an appearance”, but on that day nothing happened.

The following day, on December 2nd, in the early hours of the morning, when it was already wide awake, he saw the Lord by his bedside. The Pope, believing that the Redeemer wanted to take him to his heavenly home, said, “Jube me venire ad Te! Let me come to You!”. The apparition disappeared, then, without saying anything.

From that day there was an improvement in Holy Father’s health. And then he thought the Lord had come to comfort him and restore his health.

* Spiritual Exercises written by St. Ignatius, that Pius XII read for all his life in the original language, as shown by several witnesses

** Prayer attributed to the founder of the Society of Jesus, included in the Roman Missal among prayers of thanksgiving to the Holy Communion

Come back to «Little flowers» of Pius XII